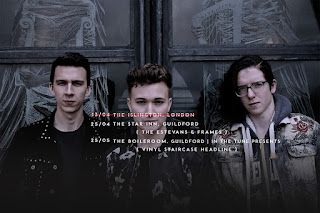 Flashing lights amidst smoke struck with power as Edge of Desire took to the stage. A bold and unified rock trio bound by heavy riffs, their performance was energy fueled. Beware, epileptic people!

Being all in black gave them a great look on stage, complete with leather jackets for the guitarist and bassist. They mixed up their performance with vocals ringing from the guitarist and instrumental licks in between. Towards the end of the set they broke it up by playing an instrumental version of Stevie Wonder's 'Superstition', which had the crowd singing along.

All three members are highly talented in their own right, each playing their instrument to a high standard. The drummer had a wicked set of acrylic drums which bounced off the blue and purple lighting. Unlike most trios, the lead singer/guitarist was not at the centre of the stage, instead positioning himself on the left parallel to the bassist on the right. This let the audience see them as three talented musicians part of a whole.

The guitarist also played the keyboard at one point, further showcasing musical diversity. Whilst he set up the bassist and drummer jammed along, keeping the musical flow together. One improvement I think could be for the vocalist to introduce all the members, and perhaps each song. My favourite was their final track 'Explicit', driven by exciting riffs similar to a famous rock song I can't remember the name of (dammit). Their explosive ending gave a great climax to a great show.

A clip I filmed: