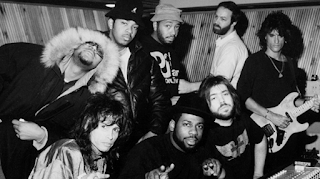 Go to any metal gig. Head-bangers and moshers jump around. Passion drips from the performers on stage as they run around like crazy. Some of them rip their shirts off and lie on the floor, lost in the roars and cries of metallic frenzy.

Compare this to a Hip-Hop gig. Rappers with strong attitude, shouting words into their mics. People nodding their heads up and down. Fans absorbed by the messages. This is their church, their sanctuary, where they can wave their dreadlocks around and throw their arms up in the air.

Are these two genres that different? At face value it seems that way. Metal thrives with crazy drum-beats and guitar riffs. Hip-Hop involves rappers spouting lyrics over produced beats. But they’re both filled with attitude and spunk. Both sets of fans crowd around the stage, absorbed by the music and the passion that pours from the artists.

Hip-Hop and Metal are genres that both take risks and involve rebellion. Metal consists of protest against the establishment, challenging what is wrong with society – take Living Colour, for example, a funk-metal band. Or SHARD, a bunch of lads from Guildford. They scream in anguish at socio-political injustice whilst claiming to be ‘the cult of personality.’

Then look at Hip-Hop. It bore from the anguished troubles of young African-Americans feeling outcast in urban poverty. The likes of Tupac, Public Enemy and Eminem have all rhymed about the injustices surrounding urban youths. Racism that affected black Americans, particularly young black men. The lost and misunderstood youth. Troubled teen. Angry at the world.

Punk also fits similarly into this niche, although the punk movement seems to have died along with the Sex Pistols. Although these genres sound different musically, their attitude all wreaks of the same havoc. These are angry, misunderstood young people who have taken to the stage to give themselves a voice. Their fans look up to them and understand because these men and women speak what they feel. They feel all together; part of a clan. And I think that’s pretty powerful, whatever the musical style.