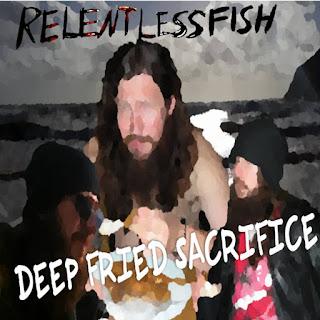 Self-described as 'experimental hard rock', this is an album that takes risks and plays with unconventionality. Driven by electronic guitar riffs and unique song structures, fans of the 'strange' will love this.

Relentless Fish uses lots of echoey reverb on his vocals, which is shown in songs like 'Generic Song' and 'Voices and Choices.' This gives off a space-rock vibe, particularly on 'Voices and Choices'. Mixes of sections appear in 'Hungry all the time', which starts off abrupt and changes into slow-paced guitar picking. He also has an overdub in 'Rise' of a man talking on the radio about destruction in the world; 'news just in; everyone is killing everyone, hatred has spread across the world.'

There are lots of hardcore protest elements throughout the album; common of hard rock and metal. 'Hope' is more metal based, similar to Living Colour and Metallica. 'Rise' pushes the lyric 'we need to stick together before its too late; this doesn't have to be our fate', commenting on socio-political unrest that often plagues our word. The phrase 'not too late to change our fate' is also stated in 'Too Late.' His songs also have powerful guitar and bass riffs with a great deal of improvisation and distortion to bring out a dirty and evocative sound.

If you enjoy grungy dirty boundary-pushing progressive rock, you should check out this album, recorded entirely by him.

He is also a bassist in ska/punk band 'The LarryFish Experiment': https://www.facebook.com/LarryFishEx/
Labels: album review