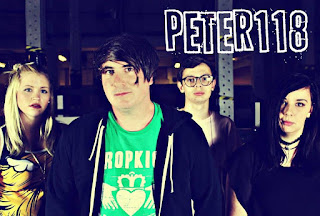 High-energy Christian Punk band Peter 118 have taken the punk world by storm, having played on Kerrang! and received 20,000 social media views in one week. They currently have an impressive 12.9K likes on their Facebook page.

Their website directs to two videos, one called 'Wasting' and another catchy one I like a lot called 'I need you more.' Their fierce upbeat drum patterns mixed with Peter's distorted guitar licks make for an enthralling sound. The band look good together, coming across as well unified and tight.

'Radio' is another catchy tune with a high quality video to match. According to his site, this song made an impact internationally, not just in the UK, showing the spread of his exciting pop-punk sound. 'Radio' sounds like the kind of song that could be played at the start of a movie, particularly with the sections where its just guitar and drum.

His songs are also quite short, packing a direct punch that leave you wanting more. Having shorter songs is very 60s, with bands like The Beatles typically having songs at two and a half minutes of length. Peter 118 have a sound I would liken to The Ramones, and should soon be up there with other notable Christian Punk bands such as Flatfoot 56 and MxPx. Overall a band who are definitely going places and doing brilliantly for themselves.