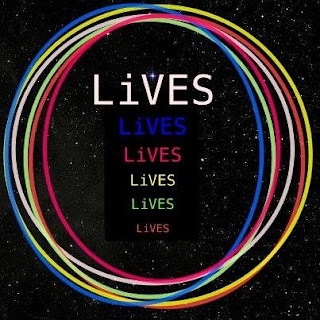 Musician and singer-songwriter Lives has blended electronic pop, drum and bass and ambience in his EP 'Flying Tape.' I was instantly engaged with 'I Found Love', a fun and upbeat song with a synth melody similar to the bass line in 'Rapper's Delight'. His vocal delivery has a Hip-Hop attitude to it that suits the style of the track.

'Up' has a similar sound to 'I Found Love'; the former track's vocal style reminds me of pop duo MKTO. 'Up' is slower than 'I Found Love', but is complete with the techno synths and lyrical themes: 'we go up, down, in and out of love, up, down, round and round we go.'  A short interlude between the two songs listed above called 'Caravan to Samarkand' brings in uncanny static and middle-eastern melodies played on the synths. Tension builds to a sudden saxophone at the end that made me jump when I first heard it!

The remaining three tracks differ to the others, showing Lives' musical diversity. 'How I Roll' has a more ambient sound with reverb on the vocals and compressed drums. Bob Geldof is listed as a contributor, and Lives has written songs for the acclaimed musician. 'Running' would appeal to fans of House and DnB; I found it very repetitive but reflective of its genre (and think it would work within a film soundtrack).

The final song, 'Street Life', is a storytelling ballad that nicely displays his voice and has melancholic lyrics: 'every time we say our goodbyes could be the last time we've got.' While I preferred the first three tracks, Lives' musical nuance encompasses a New Wave sound.

Video he made for the EP:


Listen to the EP here: https://open.spotify.com/album/6wFShvbUPu78zYK8w9kmu5?