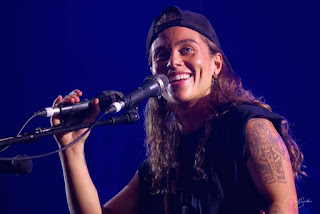 She entered the stage and the crowd screamed. I had never before seen or heard of this woman, yet when she played guitar it was magic. My mouth hung open. It was like watching a female Jimi Hendrix complete with Aussie swagger.

I was enchanted; trance-like, as I watched her psychedelic sounds unfold before my eyes. Her voice was soulful and reverb-enhanced, reminding me of Mariah Carey mixed with Alicia Keys. She played every instrument herself - drum, keyboards, guitars, trumpet - and the melodies intertwined perfectly with the backdrop. Colours and images floated behind her of jellyfish, pyramids, space and stars. I nearly cried a few times. I was so mesmerised I felt as if I was stoned; my head lolled about as I closed my eyes and became immersed in her sounds. And so many sounds. Reggae. Rhythmic strums from her guitar as she bopped up and down. Ambience. Wind chimes were lightly tapped, adding to the atmosphere.

Seeing Tash Sultana was a spiritual experience for me. It's a feeling I achieve when I meditate and actively lose all thoughts and worries. I simply existed, as a block of energy, swaying in our universe. The music was beautiful, but it wasn't just the songs, it was the way in which she commanded the stage, and turned her entire performance into an awakening of human enlightenment. What an incredibly talented woman. I wanted to give her a kiss and thank her for connecting me to my sense of humanity. Maybe she will become our generation's Prince; a multi-instrumental one-person powerhouse.